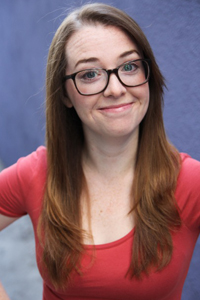 Natasha Harris (aka Natee, Tanasha, Tashana, Tish-Tash, Naturshl, Turshl, DJ Natty Ice, Lil’ Nutsy, Nuts, Tash, Tashie, Tasha, Natty Harry, Nat, Spot, Little Tiny, Noodle) got her start in acting at the ripe old age of 12 and without any originality.  The fact that her sister had started taking a drama class in high school, married with the fact that a couple of good friends joined a drama troupe gave this jealous pre-teen the nudge she needed to begin her acting career.  It all began with 12 Dancing Princesses.  (Fun Fact: There were only eight princesses… She grew up in a small town)  While in this youth group she had the great pleasure/ challenge of playing many male roles including but not limited to: Kenickie, Harold Hill, Sky Masterson , and the Baker.  (Note: She grew up in a small town).  They were high end productions… she assures you.

After years of elementary, middle, and high school (13 to be exact) Natasha ventured into the great unknown (Fun Fact: It’s located in Irvine, CA.)  She acquired her Bachelors at University of California, Irvine, by winning a sword fight… well, no, by hard work, but let’s all pretend it was a sword fight, and picked up her first professional gig at PCPA in Santa Maria.  Although the city smells like a fart, the theatre there is excellent. (Fun Fact: Many people got their start at PCPA including but not limited to: Kathy Bates, Zac Efron, Boyd Gaines, and Robin Williams.. although he was let go after getting caught smoking hash in the parking lot)  PCPA has been a consistent home away from home for Natasha in the previous years.  She hopes you all have the opportunity to work there or at the very least support this incredible theatre.

Since the start of her professional career, Natasha has had the pleasure of being a theatre vagrant up and down the West Coast performing in theatres as north as Ashland, OR and as south as Irvine, CA.  She’s also had the opportunity to perform as east as NYC in an off-off-off broadway production (or as east as Spain of you count the time she shouted a Shakespeare monologue into the Strait of Gibralter… doesn’t count?  Alright.)

May the gods of theatre keep looking down on this young woman with mercy.